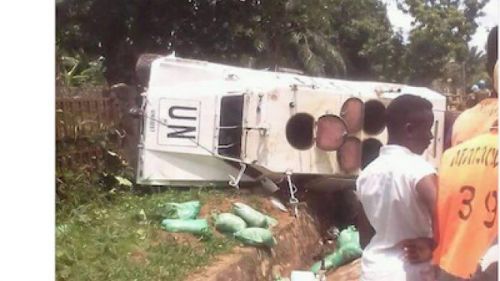 This picture was actually taken in the Democratic Republic of Congo where a truck of the UN mission in the country (MONUSCO) crashed in October 2018. The accident raised voices since rumors suggested the vehicle was illegally transporting minerals and beer crates. A rumor which MONUSCO (whose peacekeepers have been in the DRC for 20 years) denies in a Congo check’s article.

Interviewed, the MONUSCO spokesman said: “We saw that this incident raised a lot of comments on social and traditional media. Regarding the bags allegedly filled with minerals, I would like to point out that the army uses sandbags to protect itself during operations,” Florence Marchal said, stressing that “the Force Commander has instructed his teams to conduct an investigation to determine the exact circumstances of the accident" (…) sanctions will be imposed if necessary”.