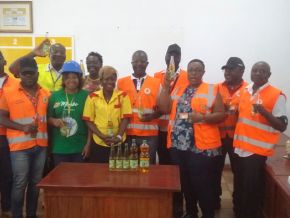 No, Cameroonian brewers don’t use any pork-based additives in their drinks

Cameroon’s national brewery (Sabc) is currently dealing with a social media rumor that suggests the company uses pork-based additives in a new alcohol-free drink called “Fanta Pomme”. It appears that the rumor is indeed false regarding verifications made by the quality standards agency (Anor).

“Misleading information is circulating on social networks about the composition of the new non-alcoholic soft drink Fanta Pomme, produced by Brasseries du Cameroun. This is the work of bad people,” Sabc said.

The company said it rather uses potassium sorbate (E202) as the only preservative used in the composition of Fanta Pomme. Scientists from Anor confirm that potassium sorbate has nothing to do with pork but rather plays a purely anti-microbial role.

The brewer specified that the food additives used within the company are authorized by the competent structures of Cameroon and the Food Codex, which is the international body in charge of food safety worldwide.