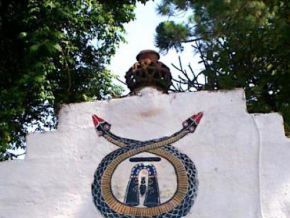 This pejorative metaphor sticks to people from the Cameroonian West region.  Rightly ?

It is often said that the Bamoun man is “a two headed snake”.  As if to mean that he is hypocritical, and you should be wary. Failing that, he could stab you in the back. Actually, the two-headed snake is a highly valued symbol for the Bamoun people. “The double headed serpent  is the symbol of the dual power of king Mbuembue”, highlights  Dr Njiassa Njoya, historian, who died in 2014, while he was serving as third deputy to the actual sultan Mbombo Njoya.

What did king Mbuembue, distant ancestor of the Bamoun people, do. He won a long war which opposed him to the Pou people who occupied extensive lands guarded by a giant monster. It had the appearance of the unattainable serpent called Sânumpût.

Having obtained the secret of his adversary, king Mbuembue finally overcame the Pou people. Later, he had a two-headed serpent built to signify that he was unassailable on all fronts, on the left and on the right.

This symbol was sculpted on beds, seats and other royal objects exclusively, explained Dr Njiassadans in one of his notes.

This symbol still continues  today. And to treat a Bamoun pejoratively as a two-headed snake is an insult which, in a sense, is really not one...