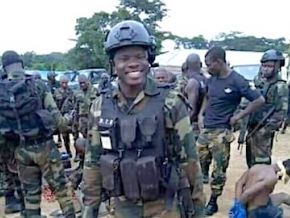 Today at around 9 a.m. a screenshot which seems to show the Facebook page of Vision 4 TV channel was posted on one of Cameroon’s Facebook famous discussion group with the following message: “Mission accomplished! 20 Anglophones shot down and the rest raving in the bush. Long live His Excellency Paul Biya, one and always indivisible”.

The one who shared this post seems to be denouncing subversive comments the TV channel would’ve made on its Facebook page. And given the current political context, the post quickly raised voices.

A check is then necessary...

When you type the words “Vision 4 TV” in the social network’s search bar, 3 pages are displayed; one showing one of the channel’s famous program and two others supposed to be its official pages. While most of the first page's posts date back to 2014 with a logo completely different from that of the screenshot, the second seems to be real one even if it does not have the blue verification badge, it has 19,758 followers. The logo is the same as on the screenshot and the latest post dates back to August 12, 2018.

If that page is truly the TV channel's official Facebook page, no result about the screenshot-publication is however found.

Many Internet users were already calling for the post’s suppression when the channel shared a new post after making no comment since one week.

We are here to inform you about a FAKE NEWS being shared on VISION 4 via Facebook...” the page mentioned.

It is therefore indeed a false publication issued, according to the channel, by "malicious persons" with the aim of “publishing discriminatory and destroying information”.

Since then, the post no longer exists on the group where it had been published.