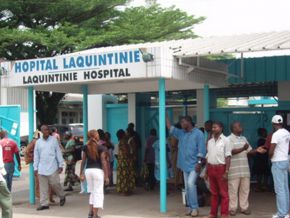 It si said that a building was erected by the Cameroonian goal scorer in memory of this mother who passed away during labour. True?

There is indeed a Samuel Eto’o Fils children's ward at the Laquintinie hospital in Douala. But this building was not put up in memory of Monique Koumatekel; this thirty-something woman pregnant with twins who passed away on 12 March 2016 at the gate of Laquintinie hospital because she was denied care.

The Samuel Eto’o Fils Pavilion is the result of a 7-year old project, therefore well before Koumatekel dreamed of the pregnancy which unfortunately, took her.

This FCfa 500 million project comes from a partnership between the hospital (at the time of former Director Gérémie Solle) and he foundation Samuel Eto'o Fils. It's commissioning was scheduled for September 2016. But it is still not operational.

It has, since this current month, been equipped with pediatric and obstetrical material relevant enough to save the lives of the numerous mothers and their babies. A noble mission which would lower the risks of another case like Monique Koumatekel’s from happening. The tragic end of this young woman scandalised the general opinion and had many tongues wagging.

The anniversary of her death, this Monday 12 March, led a certain press to write that the goal scorer Samuel Eto'o Fils built this pediatric pavilion at Laquintinie hospital in her memory. But no. This was to the glory of the best goal scorer in the history of the Indomitable Lions.