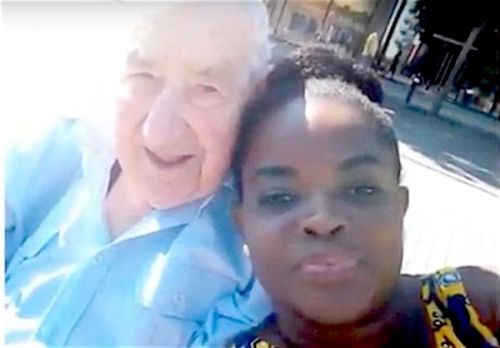 No, the woman married to a Nonagenarian is not a Cameroonian

About a week ago, a couple were the topic of online discussions in Facebook groups and pages. According to some internet users, the woman is a Cameroonian. Is it true?

Neither the man’s nationality nor the country where the couple live are mentioned in those posts. Around those posts, the comments are varied. It ranges from disbelief to astonishment. Above all, the judgemental comments were numerous. Many users commented that their marriage was a “marriage gris”.

A “marriage gris” is a marriage between a foreigner and an African Woman. In this marriage, the woman has other interests other than love. It could be the man’s nationality or money.

In the recent years, Cameroonian women made the big headlines on internet and in some European media for this practice. They were so renowned for this that a new word was coined for them: "Cameruineuse", an association of the word "Came" (short for Cameroon) and "ruineuse" (ruinous).

Even though Cameroonians are reputed for that practice, in the present case, the woman is a Ghanaian.

She met her English man while selling chargers in Ghana. Two years later, they got married and travelled to England when the woman was 24. Interviewed by a Ghanaian web TV, 15 years later, she said she was still in love with her man even though her marriage at first was due to other ulterior motives. At the time, she said that she wished her compatriots would not make the same mistake as her.