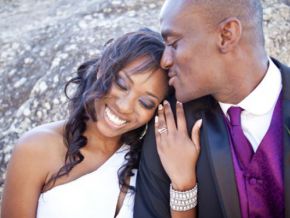 It is said that the man told her he was a high executive at an oil firm.

For a while now, three pictures of a young lady running in a wedding dress are shared on social networks in Cameroon. According to the rumor, the lady ran from the town hall after learning that unlike he pretended, her husband-to-be was no rich executive of an oil company.

The source behind the rumor said this happened this year in Cameroon. Easily believable but false nonetheless. The event did not take place in Cameroon, or involve Cameroonians. Actually, searching for the images’ origin, it was traced back to August 15, 2016, in Eket, Akwa Ibom State in Nigeria. 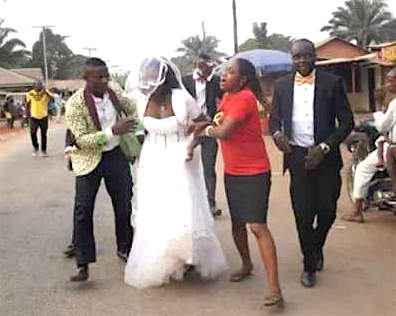 At the time, many websites, blogs and social networks users, in West Africa especially, discussed the pictures. Each time it was reported, new details would add up to the original story. According to some, “the young woman run away 30 minutes before the marriage at church after being told the truth about her husband-to-be by a friend of the family; others say she was told in front of the pastor and friends and family invited. A recent version spread in Cameroon indicates that the couple had been living together for five years; they supposedly met on social networks, and the young man sent her pictures of him at his company; meanwhile he was just a maintenance worker there; he is actually a taxi driver.”

Though we were not able to find the real truth behind the pictures, internet users came up with three hypotheses which are logical and easy to understand. The first hypothesis suggests that the pictures were taken during the shooting of a Nollywood movie. Another suggests that the couple’s car broke down before the ceremony, forcing them to walk to their destination. Third and last hypothesis says the images come from a short-movie shot by the youth of a church at Obiaruku in Delta State.