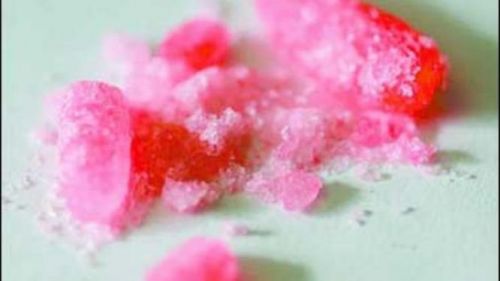 The "candy" hoax is back again with a new name.

The hoax on drug use at school that was launched in November 2017 on the African web is back again. This time, the poster (to probably make the hoax more credible) explains that a girl confirmed the fact that the drug was being sold in her schoolyard. According to the hoax, the dealers (who are also students) hide these drugs in their underwears.

In this fake warning, the name of the drug has once again been changed. It is no more "candy", the name this drug was given in November 2008 when the hoax first appeared on the web, but "strawberry quick" and  "strawberry met",

However, the message in the text remains the same. It informs that a new candy-like crystal meth named strawberry met or strawberry quick "is being given in schoolyards to children”  who use it thinking that it is candy. As in the past warnings, this drug is available in different flavors (chocolate, peanut butter, cola, cherry, orange, and grapes).

The poster advises parents to "tell children not to accept candy from strangers (…) not to accept candies that look like a friend’s own and ask them to immediately report anything they are given to their supervisors".

The image used to illustrate this version of the hoax has also been recently used to illustrate a recent fake news on a sugar whose composition could kill being sold in Cameroon. These images have however nothing to do with a deadly sugar or candy drug. They were published by www.consultant360.com, an instant messaging platform for health professionals. The images are used to illustrate a discussion on HIV/AIDS. The girl is a six-year-old patient who came to a clinic in South Africa with a 1-year history of oral lesion caused by human papillomavirus.

Drug use in Cameroon

Even though this message is a hoax, the problem of drug use is present in Cameroon and, it is important to sensitize people against it. According to recent figures from the national committee for fight against drug use, 21% of Cameroonians have once used hard drugs, 10% are regular users (60% of which are between 20 and 25 years old). The most demanded substances in the country are, cannabis (58.54%) most of the time associated with tobacco, tramadol (44.62%), cocaine (12.10%), unconventional preparations (7.59%), solvents (7.36%) and heroine (5.70%).