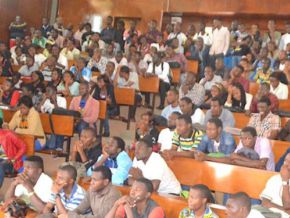 There is corruption in Cameroonian universities

It is said that corruption in universities takes many forms such as marks buying or sexually transmitted grades.

People used to talk about corruption in Cameroonian universities with more or less conviction. However, the debate took an official dimension, on November 20, 2017, when the country’s anti-corruption commission (CONAC) launched an awareness campaign on integrity at the University of Yaoundé 1.

Dieudonné Massi Gams, chairman of CONAC, explained that the campaign plans for the setting of Integrity Clubs in Cameroonian universities. “The integrity clubs are think-tanks to make the future decision-maker, a citizen honest with his person and act”, the chairman said.

At the University of Yaoundé 1, CONAC described some forms of corruption such as the buying of marks, the phenomenon of sexually transmitted grades (grades attributed against sexual favors), nepotism, fake certificates, promotions obtained with sex, tribalism, abuse of authority, etc. Dieudonné Massi Gams also indicated that “the corruption perception index in the education sector give an average of 6.5-7.5/10”.