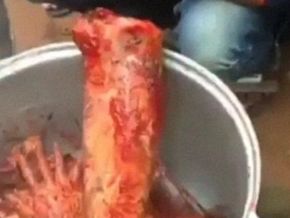 No, this gory video was not shot in Ambazonia

A gory video was posted on Facebook and, according to the poster, the scene was shot in “Ambazonia”, the name given to the English speaking region by secessionists.

On June 20, 2018, a gory video was posted on Facebook and Telegram by Cameroonians. According to the various posters, it was shot in Ambazonia, name given to the Northwest and Southwest by independentists.

In the video, there is a young man kneeling beside a big cauldron on fire. In the cauldron, there was what looked like human parts. Around the fire, the man’s friends were fanning the fire.

He was then heard saying that the meat in the pot was the best meat on earth and nobody who has never eaten such meat has to.

Well, unlike what the various posts claim, the video was not shot in Ambazonia. It is part of the special effects realized in the framework of the Nigerian film “Omambala”.

The man speaking in the video is uc. Mbachu; the set and props manager.