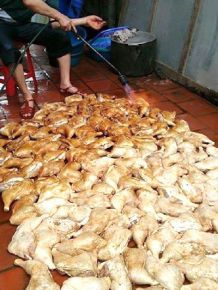 It is said that the grilled chickens are exported.

For some months now, this image is being relayed on some Cameroonian Facebook groups and on Whatsapp with enigmatic messages indexing Chinese and emphasizing their will to harm the health of citizens. Spread on the ground and grilled with a welding torch, it is said that pieces of chicken might be processed that way before being sold out of China. The only hitch is that this scene didn't happen in China but in Vietnam, in Hanoi precisely.

Published for the first time on April 6, 2015 by Tran Anh Tuan (Cau Dien, Hanoi), a 20 years old man, this image was taken that same day at one of his cousins' place at Co Loa (Dong Anh, Hanoi) during the preparations of a wedding ceremony. Unlike what is being said on social media, the chickens displayed were not being grilled. The welding torch was used to reduce the fat in the broiler chickens prepared for "spicy lemon chicken" dishes. This image, therefore, doesn't depict a process of production or processing of chickens in China.

In regards to the sanitary aspect of the preparation, the young man questioned in 2015 by the online news website “Doi Song phaup luat”, said that after the stage of torching, the chickens were cleaned up and fried.