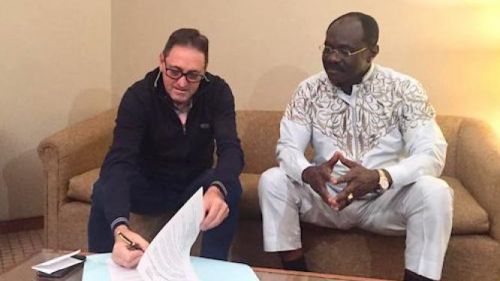 No, the new coach of the indomitable lions has not yet signed a contract with the ministry of sports

Social media posts claim that Toni Conceiçao has already officalised his appointment by signing the related documents. Is it true?

According to pictures published on social media and the Cameroonian online media, the Portuguese Toni Conceiçao, the new coach of the indomitable lions, has signed a contract with the minister of sports Narcisse Mouelle Kombi.

However, officials at the ministry informed that the pictures shown are those taken during an audience between the coach and the minister.

Gabriel Nloga, communication manager at the ministry, reveals that the contract will soon be signed by the coach, the president of the Cameroonian football federation and the minister of sports.

Fecafoot, the football federation, also confirms that it has not signed a contract with Toni Conceiçao.

Let’s note that Antonio Conceiçao Da Silva Oliveira, or Toni Conceiçao, was selected as the new manager of Cameroon’s national football team, on September 20, 2019. He is replacing Clarence Seedorf, fired after the indomitable lions’ elimination during AFCON2019 in Egypt.