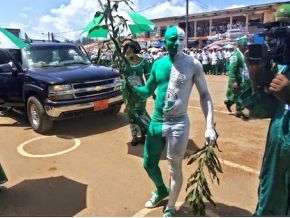 No, SDF is not changing its name

It is said that the Social Democratic Front is changing its name. True?

John Fru Ndi’s Social Democratic Front (SDF) is not changing its name. The ambition of the party (whose motto is “Power to the people”) is just to become “the Original SDF (OSDF)”. "The party must return to the population and not remain at the business of an elite where you pay for so and so position", the party’s communicator explained.

"SDF must not be considered as a party for friends. Let every member favor field works", the communicator added. SDF renowned as the main opposition party in Cameroon is obviously going through hard times with a decrease of its political power. Internal battles within the party were accentuated by the poor score of its candidate during the presidential election of October 2018.

According to the results announced by the constitutional council, Joshua Osih was the fourth out of nine candidates with 3.35% of the votes. This represents a poor performance for the eternal number 2 for presidential elections. Because of this result, internal meetings were conducted and a press conference was organized on November 21, 2018. During this meeting with the media, the general secretary of that party was blunt.

"Let me on behalf of the party and the executive national committee ask for the forgiveness of millions of Cameroonians, who always believe in SDF, for the poor performance during this presidential election", he said.

By announcing SDF’s return to the roots, the party is committing "to solve the anglophone crisis, establish federalism as the new form of state, federate electors to guarantee alternance at the head of the state".