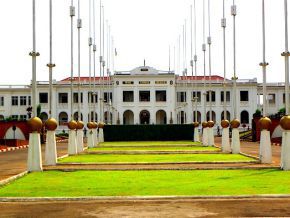 Some say entrance fee to visit the National Museum is FCFA4000

Following its reopening in January 2015, a debate sparked regarding the value of entrance fee to the National Museum of Cameroon which was closed for seven years. Truly, until recently, nationals had to pay FCFA4000 to visit the site while foreigners paid FCFA10000. However, in January this year, the fee was halved to attract more visitors.

Presently, to visit the office of former president Ahmadou Ahidjo, for example, locals pay FCFA2000 whereas foreigners pay FCFA5000, against FCFA4000 and FCFA10000 respectively in the past.

"The new Minister of Arts and Culture (Minac), Narcisse Mouelle Kombi, believed that it was necessary to make the site more accessible to both natives and foreign tourists,” explains Clavère Nken, Head of Communication at Minac. Truth is, some even believe that access to the former presidential palace is free due to free concerts organized at its plaza. As at now, authorities are struggling to make profit out of the historic buildings which dates from 1930.