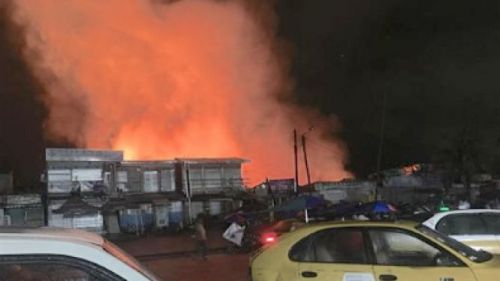 Yes, there was fire at Bounamoussadi market in Douala!

Around 3 AM today, a post informed that fire was raging Bonamoussadi market. True?

Today August 31, 2018, at about 3 AM, a post in a renowned Cameroonian facebook group reported that there was fire in Bonamoussadi market in the fifth district of Douala. With the poor writing style, many people thought it was fake news. This is not the case, however.

In the night of 30-31 August 2018, there was indeed fire in the said market. This is confirmed on the firemen’s facebook page. It took hours for the firefighters to extinguish the fire.

According to the post, the damages are significant. About 1,200 m2 was burnt but because of the crowded environment, the number of shops razed could not be determined. The firefighters explained on their Facebook page that the way those shops were built could have favored the fire.

This is the second fire in that market within 8 months (the fifth since 2012). The previous one occurred around 5 AM on December 8, 2017. At the time, a little more than ten shops were razed down by the fire. The reason stated at that time was the electrical overload due to a  sudden restoration of light. Could this fire be due to the same reason or is there a criminal hand behind the incident ? It is hard to answer these questions for the time being since the cause of this latest fire is officially unknown.

Anyway, an investigation has been launched.

Find here, the video of this incident posted by the firefighters: https://bit.ly/2N6NkIj