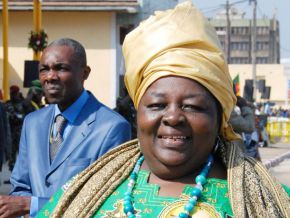 Rumour has it that there is a Françoise Foning Street, named after the RDPC ex-Mayor of Douala

The decision was apparently taken by the Urban Community of the City of Douala to honour the lifework of the illustrious departed.

It is now official and no more a rumour. There will be a street in the economic capital bearing the name of Françoise Foning, late RDPC (Democratic Assembly of the Cameroonian People) Mayor of Douala 5th, who passed away in 2015. This was the decision of the Council of the Urban Community of Douala on 16 December 2016, according to the document of which stopblablacam.com obtained a copy.

“Street n◦5.508 starting from Pharmacie Akwa-Nord, going through Axe-Lourd Bepanda, Boulangerie de la Paix and Station Bocom to rond-point Makepe is named ‘Françoise Foning’”, one can read in the final communiqué of the Council, signed by his President, Fritz Ntone Ntone.

The document mentions in Article 3 that, the commemorative plaque will be erected at both exits of said street, with a monography of the life and work of chosen personality.

Born in 1949 and deceased on 23 January 2015 following an accident on the Yaoundé-Bafoussam road, Françoise Foning was known as a unrepentant militant for RDPC and of the President, Paul Biya.

Mrs Foning was also President of the World Organisation of Women Business Executives.