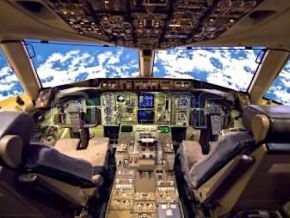 The cameroonian airline could apparently even recruit the young trainees.

This time, it is not a hoax. Young people still doubting the information according to which Cameroon Airlines Corp (Camair-Co) wants to train to train Cameroonian women as pilots can refer to the official press release signed on 24 April, 2017 by the Managing Director of the airline.

In this communiqué, Ernest Dikoum invites all Cameroonian men and women looking forward to a career in air transport as technical crew (pilots), that an external exam for the recruitment in basic training of young pilots has been launched.

Applicants must be Cameroonian nationals, either male or female. The maximum qualifying age is 25 years. Applicants must have at least the scientific baccalaureate (high school leaving certificate) with 3 years of university-level studies. They must pass the medical visit for the selection carried out at the Centre d’expertise médicale aéronautique (Cema). Good command of the English language is required.

Interested candidates can send their application online or submit it at the office of the secretary of the Camair-Co Human Resources Director at the headquarters in Bonanjo, Douala latest by 31 May 2017.