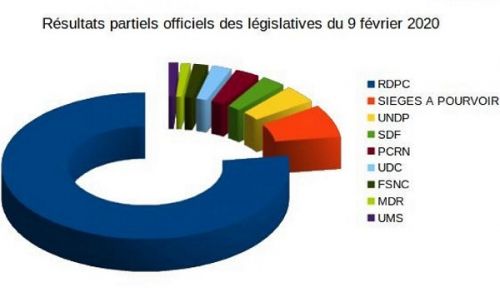 For the 10th parliamentary term (2020-2025), eight political parties will be represented in the National Assembly. The Constitutional Council pronounced its verdict concerning the February 9 legislative elections during a public hearing presided by its president Clément Atangana.

The results concern 167 seats, pending the results of the 11 constituencies in the English-speaking zone (13 seats) where the vote will be reorganized at the request of the Constitutional Council. For the time being, nearly 57% of the parliamentarians have been renewed. For the elected deputies, 95 are new and 72 deputies of the 9th term kept their seats.

Party for National Reconciliation (PCRN) is among the newcomers to the National Assembly. Its president Cabral Libii, and three of his comrades will now sit in the lower house of the Cameroonian Parliament.

Currently, the Social Democratic Front (SDF) has five seats. This figure could go upwards after the by-elections to be held in the North-West and South-West.

Pierre Kouemo's Union of Socialist Movements (UMS) made a breakthrough in the Western region and won two seats in the national representation. Ditto for the Movement for the Defence of the Republic (MDR) of Dakole Daïssala.

The February 9 legislative elections recorded a participation rate of 43.79%. 3,021,947 voters out of the 6,900,928 registered by Elections Cameroon voted. For Clément Atangana, President of the Constitutional Council, "this election was free, transparent and credible. In short, regular, despite moderate participation.”