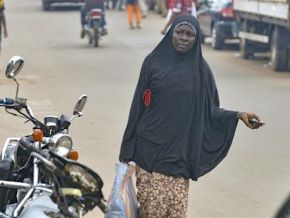 Is it forbidden to wear the full-face veil in Cameroon ?

It is said that because of the recurrent terrorist attacks by women kamikazes generally wearing veils in the Far North, the authorities issued a ban on wearing this piece of clothing throughout the country.

Foreigners looking to visit Cameroon hear truths and mistruths. This is the case with regards to the full-face veil. Expatriates indeed report that they were told that the niqab has been banned by the Cameroonian authorities. This declaration is only partly true. Because the ban only affects the Far North.

Indeed, in July 2015, following a series of kamikaze attacks carried out by women concealing their bombs under their veil, the Governor of the Far North region, Midjiyawa Bakari, ordered the ban on the niqab in his constituency.

“Security has been strengthened, there are systematic vehicle checks, including for luggage, a ban on motorbikes movement at night, a ban on the movement of cars with tinted windows, a ban on wearing veils. The message is that checks will certainly increase in number and will be more thorough but the population must not see these measures as hassles”, declared the Governor to the press.

This ban from the Governor nevertheless divided the Muslim community. According to Cheick Baba Moussa, Imam at the Tsinga Islamic Complex, in Yaoundé, “with regards to the full-face veil, its obligation is a source of divergence between Muslims. But not its institutional nature in Islam. Some like Saudi Arabia say it is mandatory. Others reckon it is not mandatory, but I think it is better to wear it”.

Cheick Baba Moussa adds: “it is true that there is a problem with insecurity, but to formally ban it is also not good in my opinion. I agree that people could take advantage of it to carry out despicable acts and ascribe them to Islam. But, it should not be categorically proscribed. But, I think this must be a temporary measure”.