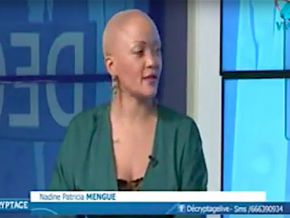 Is Nadine Patricia Mengue going to work at Vision 4?

It is said that the former star of CRTV is coming back to Cameroon and, she will work at Vision 4. True?

This weekend, the news made the buzz on social media: Nadine Patricia Mengue could be coming back to Cameroon.

Indeed, the well-known woman who is a former presenter at CRTV will soon work at Vision 4. She confirmed this on February 2, 2018, during the show “Décryptage” presented by Ernest Obama.

This news sparked comments because the woman had presented strategic shows such as “Tam-tam Week-end” and “Tube Vision” at the national television. The singer (she produced an album which failed), left Cameroon for Europe more than ten years ago.

After that, she worked at 3A Telesud in Paris. So, her return puzzles some people.

For the time being, however, nobody knows the show(s) she will present at Vision4 or when she will start but, during the show “Décryptage”, she assured that it will happen at any time. So, Stay tuned…