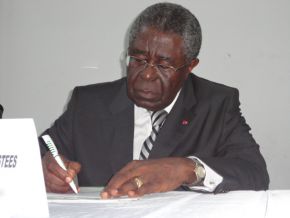 Did Peter Mafany Musonge resigned from his position as Senator?

According to the rumour, there is an incompatibility between his position as member of parliament and his recent appointment as Head of the National Commission for the Promotion of Bilingualism and Multiculturalism.

Has Peter Mafany Musonge resigned as Senator? This is the question everyone has been asking for some days about this former Prime Minister (1996-2000), appointed on 15 March 2017, by presidential decree, as President of the National Commission for the Promotion of Bilingualism and Multiculturalism. The answer is: yes, he resigned.

Peter Mafany Musonge indeed left the Senate in compliance with the law preventing officials from holding an elective office while being appointed in public office. He was replaced by his deputy, Dima Gabriel, from the Central region, where the Cameroonian institutions are headquartered.

Dima Gabriel is a businessman with an establishment reputation in Limbe in the south-West region. Mr Mafany was immediately replaced at the head of the parliamentary group by Chief Tabe Tando Ndiep Nso.

Senator Tabe Tando was chosen during the conference of the members of Parliament and senators of the Rassemblement Démocratique du Peuple Camerounais (Rdpc – Democratic Assembly of the Cameroonian People) at the headquarters of this party in power on Tuesday 21 March. The leader of the parliamentary group, Tabe Tando is one of the seven elected senators and one of the leaders in the South-West region. He is also a lawyer by training and Head of the Styled Equity Chambers in Douala, opened in 1975.