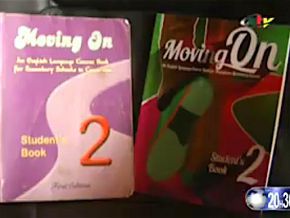 A schoolbook promoting Ambazonia was removed from the curriculum

It is said that some parts of Moving On, Student's Book 2 promotes secessionism. True ?

This year, Moving On, Student's Book 2, a manual used by seventh graders in the English speaking part of Cameroon, has been greatly altered. The editor has inserted a page, with the flag of Ambazonia, promoting this unofficial country created by Cameroonian secessionists who demand the independence of the English speaking regions.

During the report, he explained that he did not give his consent to this alteration. The minister said that eight educational inspectors working at the ministry of secondary education, an official of the British embassy and two persons at the publishing house took part in the deed.

Jean Ernest Ngalle Bibehe revealed that the educational inspectors were relieved from their duties. He also explained that the schoolbooks chosen for the curriculum will be reviewed every year; not every three years as it used to be.

Link to the report: