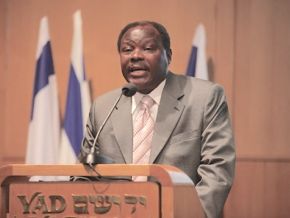 No, Cameroon’s ambassador to the USA has not been summoned by an American judge

Rumors have it that Cameroon’s ambassador to the USA Henri Etoundi Essomba will appear in front of an American judge. Is it true?

A Facebook post indicated that Cameroon’s ambassador to the USA Henri Etoundi Essomba had been summoned by an American judge for  “assault, fighting, wanton violence, and battery on members of the BAS (Brigade anti-sardinards)”, which is the name given to Cameroonian diaspora opposed to the current government.

According to the post, the event occurred on February 3, 2019, during the last demonstration organized by members of the BAS in front of Cameroon’s embassy at 2349 Massachusetts Avenue North-West, Washington DC. The same source informed that the diplomat was to appear before the US judge on February 5, 2019.

"For the time being, we have received no report on the ambassador's convocation”, said Chris Schirm, the press agent of the US State Department. Cameroon’s ministry of foreign affairs indicated that this is a baseless rumor. “Cameroon’s ambassador is still in office in the USA. Consequently, he has an immunity covered by the Vienna convention on diplomatic relations of 1961. His immunity has not been waived."

He shall also enjoy immunity from its civil and administrative jurisdiction, except in the case of:

(a) A real action relating to private immovable property situated in the territory of the receiving State, unless he holds it on behalf of the sending State for the purposes of the mission;

(b) An action relating to succession in which the diplomatic agent is involved as executor, administrator, heir or legatee as a private person and not on behalf of the sending State;

(c) An action relating to any professional or commercial activity exercised by the diplomatic agent in the receiving State outside his official functions”.

In addition, “no measures of execution may be taken in respect of a diplomatic agent except in the cases coming under subparagraphs (a), (b) and (c) of paragraph 1 of this article, and provided that the measures concerned can be taken without infringing the inviolability of his person or of his residence”.