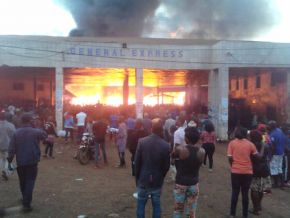 It is said that this picture shows the extent of the tragedy that occurred at the headquarters of the transport agency in Bafoussam. True?

Général Express is once again hit by misfortune after a series of road accidents and a second suspension of its activities within a year by the transport minister. Indeed, on August 7, 2018, part of its agency in Bafoussam, in the West, was consumed by fire.

"It happened at about 6 PM", a statement published by Jean Paul Nogou, Général Express managing director, informs. There are no human losses apart from the huge property damages. Let's note that for the time being, the cause of this fire is still unknown.

It is also worth reminding that the inter-urban transport company was handed a two months conditional suspension on July 1, 2018 by Cameroon's transport minister Jean Ernest Ngalle Bibehe. This measure followed an umpteenth deadly road accident involving the company on March 30, 2018. The current suspension is reminiscent of the one incurred in October 2017 following an accident that officially resulted in the death of 15 people.