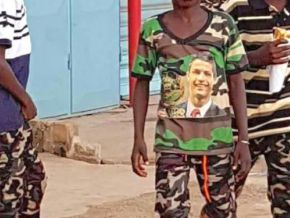 Are civilians prohibited from wearing clothes printed with military design?

It is said that any civilian who wear clothes printed with military motives will be liable for lawsuits. True?

Truly, military-printed clothes are sold in markets and other shopping areas in Cameroon but, curiously, wearing them is strongly punishable by law. By the way, it is common to see armed forces undress publicly those who wear them. In 2008, the singer Lady Ponce, wearing treillis, was nearly ridiculized while she was preparing for a cabaret show with her dancers.

Colonel Didier Badjeck, communication manager at Cameroon’s defense ministry, explained that civilians are strictly forbidden from wearing military uniforms because it leads to confusion in the society and, some people use them for mischievous purposes. The spokesperson said this to the daily Nouvelle Expression on Wednesday august, 9, 2017.

The daily reminded that “selling, making, distributing or wearing military uniforms is governed by the law N°82-19 adopted by Cameroon’s national assembly and promulgated on November 26, 1982 by the president of the country”.

This law stipulates that those who sell, make, buy, distribute, wear or hold military badges or attires will be punished with either three months to two years imprisonment and fines ranging from CFA50,000 to CFA200,000 or one of those two sanctions. So, wearing them is prohibited.

Word to the Wise…