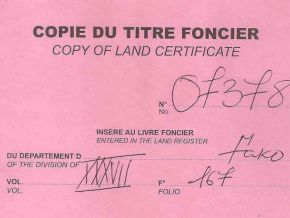 According to what some people say, the law prohibits a citizen whose age is below 50 from having a land title in their name.

“I submitted an application for a plot of land to be registered and this was denied. The reason given was that the law prohibits the issuance of the first land title to a citizen whose age is lower than 50. It was suggested that I should get the title issued in the name of a person who is over 50 so that the person who give it to me later”. This was the problem expressed by a Cameroonian during a legal advice forum, on 29 March 2017.

Immediately, Mr Atangana Eteme’s law firm specified that: “one has to be 40 years old, and not 50, to start the process to register a land in your name”. The law firm however revealed that a citizen could inherit a plot, without any age restriction. One simply has to reach the legal majority.

The Atangana Eteme law firm warns of the risks for people whose age is below 40 who would use a representatives to bypass the law. “The inconvenience is that the representative in whose name the title is issued must be honest and cooperate with you, otherwise your collaterals, if any, could tomorrow maliciously, lay a claim on the same land through inheritance”.