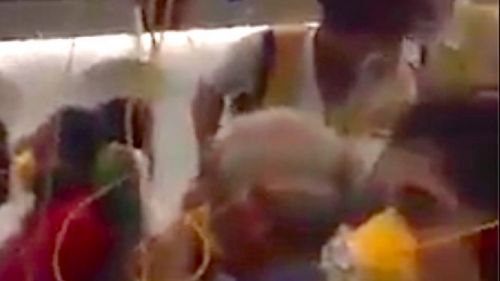 No this isn’t the crashed Ethiopian Airlines’ aircraft

It's said the video right here shows the last moment of the ET302 flight of Ethiopian Airlines. True?

A video currently being widespread on social media in Cameroon is allegedly said to ‘show the last moments of passengers onboard the ET302 of Ethiopian Airlines just before the plane crashed March 10 in Addis Ababa, the Ethiopian capital.

In that video, we can see people wearing oxygen masks with crying kids and two stewardesses helping them. The airline’s logo, which can be seen on the seats, is indeed that of Ethiopian Airlines but the video has no relation with the crash that occurred last Sunday. And here’s why, as explained by Storyful: the seating layout is completely different from that of Boeing 737 Max 8, which was the model of the crashed plane. Here, we have three rows of seats, in a two-three-two configuration separated by two aisles. The crashed aircraft had two rows of seats separated by one aisle.

Looking further, we can also notice a food tray right in front of some passengers but given that the Boeing crashed just 6 min after it took off, food could not have been already served at that moment. Also, the baby crib seen in the video showed that the plane in question was already at a “cruise altitude,” Storyful said. Baby cribs are often distributed to passengers with young children.

Other indicators clearly revealed the sequence was not filmed on the flight ET302 since it shows dark windows, suggesting it is a night flight while the accident aircraft took off during the day on Sunday, precisely at 8:38 am and, let’s say it again, crashed just 6 min after it took off.

According to Storyful, these images may have been shot on March 5 during a flight from Addis Ababa to Toronto. Let’s recall that the Ethiopian Airlines flight that crashed on Sunday was headed to Nairobi, the Kenyan capital. It killed 157 people of 35 different nationalities, including 22 United Nations employees.