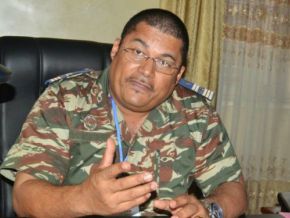 Unlike what is being said, Marcel Namata Diteng, kidnapped on February 11, has not yet been found. Neither has his corpse.

Since February 11, 2018, a picture of a corpse is being shared on the internet. According to the comments, it is Marcel Namata Diteng, sub-prefect of Batibo in the Northwest, who was kidnapped and executed by secessionists that same day.

On February 12, 2018, Didier Badjeck, communication manager at the ministry of defense belied the rumors. During the attacks on February 11, 2018, “even if they resulted in the death of 3 constables and the Botibo sub prefect’s abduction, the attacks have been restrained. They were fewer than we expected” the official warned however that the sub prefect’s abduction should be seen as a new development in the crisis in the English speaking region, particularly if the man is killed.

He also said that two suspects have already been arrested but since 10 :30 PM on February 11, Marcel Namata Diteng has not found.

To dissipate the rumors which claim that the sub-prefect is dead, the minister of communication Issa Tchiroma Bakary gave an interview to Cameroon Tribune.

“On Sunday, February 11, 2018, in the morning, the sub-prefect of Botibo in the Northwest was kidnapped. Alerted by the population about an emergency, he went there but it was a set-up by the assailants. That is how he was abducted. His car has been found burnt but he was nowhere to be found. The whole defense and security force has been mobilized to find him”, he said.