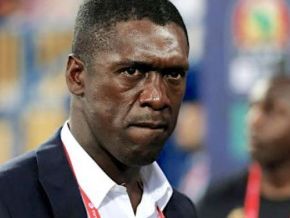 After the early elimination of the Lions Indomptables during the African Cup of Nations (AfCON 2019), after Nigeria beat them 2-3, a rumor sparked on social networks immediately suggesting the team’s coach had been fired.

The information, which was considered a simple rumor turned to be an official news. In a statement issued on Tuesday, July 16, 2019, the Cameroon Football Federation (Fecafoot) announced that the Dutch technician is no longer the coach of the Lions Indomptables.

“Fecafoot has, in accordance with the provisions of the termination clauses of their respective employment contracts, decided to terminate the functions of the coach, Clarence Clyde Seedorf and the assistant coach, Patrick Stéphan Kluivert as of today,” indicates the address signed by the president of Fecafoot, Seidou Mbombo Njoya.

The Fecafoot statement makes official the end of Clarence Seedorf's contract initially supposed to end in 2020. During a recent interview with crtv, the minister of sports, Narcisse Mouelle Kombi, made it clear that Clarence Seedorf would not be reappointed.