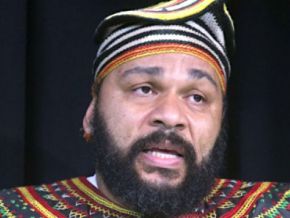 Does Dieudonné Mbala really want to be the president of Cameroon?

The renowned humorist once again stated on Monday that he will run in his country’s next presidential election. Is he serious about it or not?

Dieudonné Mbala is presently in Cameroon even though French audience expects him this Friday, October 19, 2017, at the “Théâtre de la Main d’Or “ in Paris for his show titled “ La Guerre”. The renowned humorist took the opportunity of his short stay in his native country to sow the seeds of his “presidential campaign”. By the way, he held a press conference, on Monday October 16, at the Hilton hotel in Yaoundé, to let people know that he is running for the seat at the presidential palace in Etoudi in 2018.

His conference did not seem like a one-man show. He had already casually announced his ambition on his YouTube channel in December 2016.

This said, is he really serious or not? Anyway, the controversial Dieudonné does not meet some of the eligibility criteria required by the electoral code. This code stipulates in Article 117 the presidential candidate must “justify 12 months consecutive stay on national soil”. So, will “Dieudo” abandon his French tour, which will end in June 2018, to stay in Cameroon for 12 straight months? He must also waive his French passport goodbye and become a Cameroonian citizen.

Cameroon’s electoral code also stipulates that the presidential duties cannot accommodate any other public or professional duties. Is Dieudonné ready to drop his successful career as a comedian? The middle-aged man calmly explained that he has not yet decided to join any political party but, he will consider every membership proposals he receives. Let’s remind that Dieudonné ran for the French legislative in the department of Essonne, in May 2017 but, he was not successful.