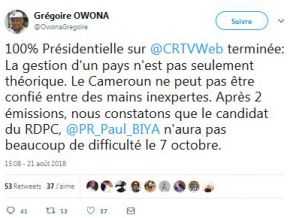 Yesterday evening, at the end of the debate on CRTV between Cabarl Libii, the candidate nominated by Univers and Benoît Ndong Soumhet, advisor of RDPC’s general secretary, a tweet presumably posted by the minister of labor and social security sparked controversy on Twitter and Facebook.

"100% Présidentielles on @CRTVWEB is over. The management of a country is not just theories. Cameroon cannot be entrusted to amateur hands. After two shows, we note that RDPC’s candidate @Paul Biya will not have a hard time on October 7, 2018”. The tweet says.

The account belongs to the minister. He confirmed it in a tweet on August 21, 2018. This account was created in August 2018 and since the ninth of this month, the posts were either activist by nature or informed of the minister’s activities.

Like the twitter account @OwonaGregoire, the minister’s Facebook account has also been really active since August 13, 2018. With its creation date hidden, it is hard to know since when it was created. It is not an official account but, it is different from the 21 others bearing the minister’s name, profile, and image. On Twitter also, apart from the official account, there are four others with the same name but without a profile picture.