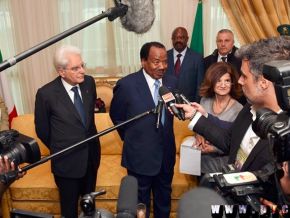 The Cameroonian Head of State is honouring an invitation from his Italian counterpart Sergio Mattarella.

Through word to mouth, it is covertly said that President Paul Biya might undertake an official visit in Italy in March 2017. Beyond whispers, “stopblablacam.com” is able to confirm that indeed, President Biya is preparing for a “State visit” in Italy from 20 to 22 March 2017.

In this regard, a fax message dated 15 February 2017 from the Director of the Private Office, Martin Belinga, of which we obtained a copy, addresses the Minister of Communication, Issa Tchiroma Bakary, on this issue.

“Kindly request your proposal – Stop – For List of journalists and technicians likely to be part of PRC [President of the Republic of Cameroon] advance mission per usual quotas – Stop – Utmost urgency – End”, writes the Director of the Private Office.

The announced visit of Cameroon’s number 1 in Italy is on the basis of reciprocity as from 17 to 20 March 2016, Sergio Mattarella, President of the Italian Republic, had undertaken a similar visit in Cameroon.

Sergio Mattarella then facilitated the finalisation of some projects under negotiations between Italian economic operators and Cameroonian authorities. Particularly, the construction of a 60,000-seat stadium in Olembe, by the company Puccini. Or the real estate project of the company Pizzarotti, who plans to build 11,000 accommodations in Yaoundé and suburbs.