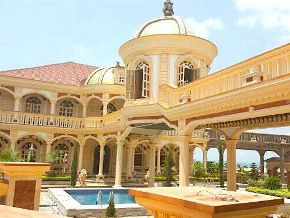 It is said that the former Director of Budget, Felix Samba, is the owner of a castle worthy of the Arabian tales in Yaoundé

According to videos on internet, it is a vast luxurious location worthy of those of Emirati billionaire.

Since 18 April 2017, internet users in Cameroon have been sharing images and videos of a castle comparable to those in the Arabian nights tales supposedly built in the centre of the capital Yaoundé.

An obviously amateur photograph took several shots. And in a video we can see a residence made of successive duplexes with dome-like roofs and linked by hanging walkways.

All that covered in ostentatious luxury, with marble, gildings, precious woods, staff, glasswork and wrought iron. The owner of the place has an obvious taste for decoration, with a painting representing the Lord’s Supper before the passion of Christ. In another video, luxury vehicles are reviewed.

The owner also enjoys statues. A Bamiléké mask is recognisable among others, lions and goddesses set in marble for eternity in this affluent environment. On one of the posted photos, a swimming pool appears, the ultimate jewel of a dwelling which has nothing to envy to Qatari emirs’ castles presented in documentaries on billionaires.

The comment with the images goes: “The castle of Felix Antoine Samba, General Inspector at the Ministry of Finance and former General Director of the Budget”.

The comments with the following posts are: “This is Versailles, isn't it?”; “The incomparable house built by a civil servant in Cameroon”; “My God, the rich are getting richer and the poor even more poor”.

His entourage just reminds that Mr Samba is entitled to use his assets as he sees fit. And that it is not with his civil servant salary that he built his castle but with the earnings from his various businesses.

But we found the trace of an employee who laid the tiles in this house. “It is Mr Samba's home. When I was laying the tiles, he was buying good material, of good quality. He thought about the appropriate quantity depending on whether the quote presented to him was high or low”, revealed the source.

Several other concurrent sources, and even a painted portrait of Mr Samba briefly seen in one of the 7-minute videos uploaded online indeed show that, this castle belongs to the current General Inspector of the Ministry of Finance.