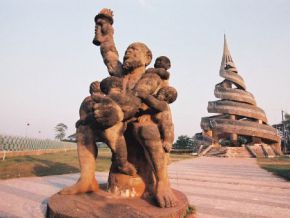 Was the widow of Nationalist Ruben Um Nyobe invited to Palais de l’Unité on 20 May 2017?

During the dinner offered at the presidential palace of the Republic of Cameroon on 20 May 2017, the Cameroonian National Day, the public television service presented someone who is apparently Ngo Djock Marie. According to CRTV, this is the widow of the former General Secretary of the historical party, Union des populations du Cameroun (UPC - Cameroon's People Union), Ruben Um Nyobe (10 April 1913 – 13 September 1958).

Om social networks, reactions abounded. “Um Nyobe’s widow invited at the Palais de l'Unité. When it is good, it is good. There is a beginning to everything”, writes one web user. “To the people in charge of State protocol and the private office of the President it is good to have taken such an initiative. Change is a slow but gradual process. It is good to start acknowledging and honouring our heroes”, writes another.

While the Office of the President of the Republic is congratulated by some for honouring nationalist Um Nyobe, denials are being issued.

With photos. “The woman on the TV is called Ngo Djock Marie, partner of Um in the maquis, she had a son with him. The real widow is called Ngo Mayag Marthe. Married to Um Nyobe in 1944 in Eseka, she only had daughters”, explains a web user who took a picture with the legal wife of the former SG of UPC, killed by the French army on the eve of the independence of the country.

“I know Marthe Um Nyobe, I know about her affair with Um, I saw her marriage certificate, the picture that goes with it and this woman seen at the Palais de l’Unité is not Marthe Um Nyobe who is still alive”, declares cameroonian sociologist, Vincent Sosthène Fouda. Different testimonies which clarified the truth. The woman presented on CRTV was not the widow of Ruben Um Nyobe.