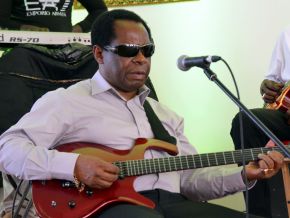 The Cameroonian musical world repeats that the late king of funk did a cover of a song by a cameroonian singer, without his agreement. True?

It is known that Michael Jackson plagiarised “Soul Makossa” by Manu Dibango. In the same vein of plagiarised Cameroonian musicians, André-Marie Tala, who was plagiarised by the famous American singer James Brown, is often mentioned. Indeed, the late pope of funk (who passed away on 25 December 2006) covered “Hot koki” by the Cameroonian musician. History has it that James Brown came to Cameroon in May 1975 and fell in love with this song by André-Marie Tala.

“James Brown came to Cameroon in May 1975. I gave him, as well as his manager Charles Bobbit, a copy of my album “Hot koki”, recorded a year earlier and which had just been released. A few months later, I heard his cover of it. Unfortunately, there was no mention of my name on the sleeve of his disk ‘Everybody’s Doin’ The Hustle & Dead On The Double Bump’. That was it! I started legal proceedings, which I won after four years”, tells the seventy-something singer on the website Tribune2lartiste.com. He continues by saying that the soul aspect of “Hot koki” must have been sounded good to the ear of the author of the global smash hit “I feel good”.

“He -James Brown – covered the introduction, the body of the song, the same range, the same background. He just changed the lyrics. Instead of singing in my mother tongue, he sang in English: Hustle (Dead on it)”, the visually-impaired singer explains. After 4 years of legal battle, he won. But the singer always specified that his victory was more moral and media-related, than financially-motivated.