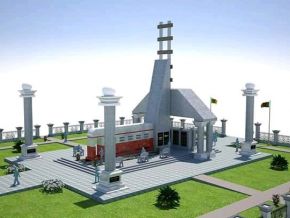 It is said that this will be the cost of the monument to be constructed in memory of the victims of the October 2016 rail accident. True?

This amount will surely shock many people: CFA450 million to erect a monument in the memory of those 79 deaths and hundreds of injured in the rail accident of October 21, 2016, in Eseka.

This was revealed by Fridolin Ndzinga Nga, laureate of the national competition launched in June 2017 for the conception of a mockup of the monument in Eseka. He said this during a recent interview on CRTV television while estimating the amount needed to realize his mockup. But, let’s be real, there is a large gap between conceiving a mockup and constructing the monument.

Let’s remind that according to Mouelle Kombi, the minister of arts and culture, this monument will be dedicated to the victims of the Eseka rail accident.

At the ministry of culture, it is revealed that the official budget for that monument has not been determined yet. We were also told that this ministry’s department is not even the one to take care of the financial aspects of the projects. The financial aspects are handled by the ministers of public works and of procurement markets.