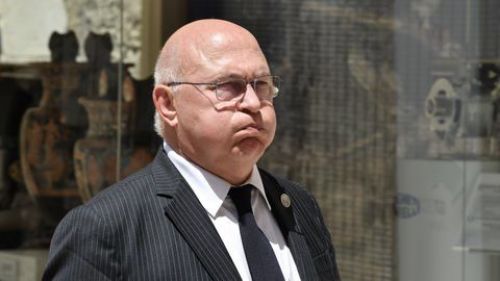 No, Michel Sapin did not threaten African countries

It is said that during a press conference, Michel Sapin threatened African countries warning them not to change the CFA Franc. Is it true?

For a while now, a statement supposedly said by Michel Sapin, former French minister of Finance, is being shared on Whatsapp. "Don’t even touch the CFA francs or terrorism will be your share,” the statement read.

An internet search shows that as of April 14, 2016, the image had surfaced on blogs, Facebook pages and forums in Senegal. Indeed, fours days before that date, Michel Sapin was in Senegal where he visited numerous industrial and agriculture sites. He also held a press conference with Senegal’s minister of economy Amadou Bâ.

During the conference, he was interviewed about the devaluation of the CFA francs. He indicated that it was up to African countries to do so. “Should there be a change [of this currency], France would support but not replace African countries” in that process, he said. According to him, “France will be there to guarantee stability.”

After questions related to the CFA Franc, he talked about the solidarity of France in the fight against terrorism and his will to support Senegal in the implementation of some of its projects.

He didn’t utter those words attributed to him but, his views on the CFA Franc and on terrorism were considered as threats by some people.