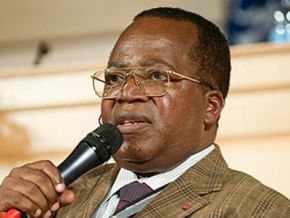 Has Robert Nkili really been arrested?

It is said that the former transport minister is one of the top officials actually incarcerated at Kondengui. True?

Unlike what is being said here and there, Robert Nkili has not been arrested. This is corroborated by a picture of the man, wearing an outfit of RDPC, posted on March 22, 2018, by Francis Zibi Samba, his comrade and mayor of Ayos.

The mayor reveals that he took the picture with his own phone at the end of a political meeting that Robert Nkili conducted with the local politicians in the framework of the senatorials. He also indicated that at the time he was posting, Nkili was peacefully sleeping at the campaigning headquarters in Akolnolinga.

The reason why many people think that Robert Nkili is one of the prey of “Opération Epervier” launched to get corrupted officials is that the former transport minister (2011-2015) is connected to the acquisition of two Chinese MA60 for CAMAIR-Co. As far as this connection is concerned, it should be reminded that in front of the senators, he pointed out that he was the minister of labor when the acquisition contract was signed.