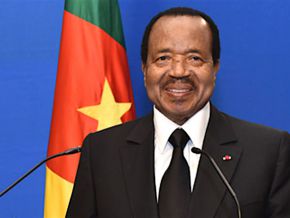 Is it true that Paul Biya never gave a speech in English ?

It is rumored that the president of the only African bilingual nation speaks only French.

Cameroonians are used to listening to their President’s speeches dubbed in English on the national TV channel. Therefore some are not aware that the Head of State has pronounced a bilingual speech on Feb. 24, 2017, at Buea, on the sidelines of the 50th anniversary of Cameroon’s Reunification.

At the occasion, Paul Biya had in person gone to the capital of the South West region, one of the English-speaking parts of the country. Surprising many, he spoke few words in English at the opening and closing of his speech. Indeed, over the speech’s twenty seven minutes, the President spoke English in the first eight minutes, before continuing in French, and closing the last two minutes in English again.

Those present that day lauded the president’s efforts. “I am proud, very proud to be in Buea, proud to walk on the same soil like our heroes who fought for Reunification,” he said, not really fluid, but understandable at least.

Regardless, it remains that in over 35 years of ruling the only bilingual country in Africa, Paul Biya, at the exception of this time, gave all his speeches in French.

Here are some links proving this: