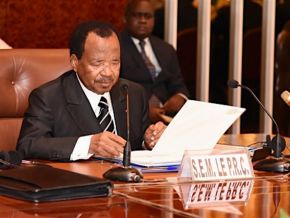 It is no exaggeration to say that Cameroon's President Paul Biya who was born on February 13, 1933 in Mvoméka'a, began his career at the top of a ladder which other officials had to climb. Truly, after returning to Cameroon in 1962 with a degree from the Institut des Hautes Études d'Outre-Mer (Paris), the current president was directly appointed as Chargé de mission of the Presidency. Almost two years later, he was promoted to be the director of the cabinet of the Minister of National Education, Youth and Culture. In July 1965, he climbs another step becoming General Secretary of the same office.

In December 1967, he goes back to the presidency as director of the civil cabinet. While holding this position, M. Biya was again promoted in January 1968 as Secretary General of the Presidency. Seven years later, June 1975, he became the Prime Minister of the country.

Later, the Law No. 79/02 of June 29, 1979 makes the Prime Minister the constitutional successor of the President of the Republic. On November 6, 1982, Paul Biya was sworn in as President of the United Republic of Cameroon, the second in the history of the country. The ceremony took place at the National Assembly, before the deputies, following the resignation, on November 4, 1982, of President Ahmadou Ahidjo.

Elected President of the Republic of Cameroon on January 14, 1984, and re-elected on April 24, 1988 and October 11, 1992 (first multiple candidacy direct presidential election in Cameroon), Paul Biya succeeded himself at the position on October 11, 10 and 9 of 1997, 2004 and 2011 respectively. While the next presidential election is scheduled for 2018, M. Biya has not yet announced if he would take part to the polls or not.