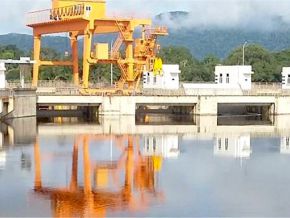 According to the rumour, the hydroelectric infrastructure is currently l in heaps of metal and concrete rubble

Contrary to the rumour spread by some media during the week of 20 Mars 2017, the communication unit of the project for the Memve’ele hydroelectric dam (211 MW) categorically refuted the announcement that the installations of the dam had broken down. “We categorically deny this publication worthy of people longing for pompous information and wanting to fill the desperately empty coffers of their institutions, while specifying that said infrastructure and all its components, built in strict compliance with the regulations are well and truly standing, and have not suffered any damage, especially in this period of low-flow of water”, writes the communication unit on 25 March 2017.

The same unit adds that, tests are carried out on a daily basis on site, but no major incident has been recorded to date. The communication service of the project indicates that, a piece of information of such gravity, and this should have tipped the general public, should normally be supported by photographs of the building reduced to a heap of metal and concrete rubble. “We defy anyone capable of bringing photographic evidence of such fake information, and invite some supporters of this type of shameful methods to join us, to verify the “charade” of the enemies of the countries on site”, repeats the communication team.

Let us recall that on 28 February 2017 in Nyabizan in the South, Mr Motaze signed with Eximbank China a loan agreement of FCfa 83 billion to finance the project for the construction of a drainage system for the electrical energy produced by the hydroelectric dam worth a total of FCfa 97.5 billion. It is also through these power grid lines that the balance between offer and demand in energy in the southern interconnected grid will be established. The project’s timetable, for its part, schedules the delivery of the work for 2018. This new financing from Eximbank China is part of the FCfa 243 billion that the Chinese side must bring to this project which will cost a total of FCfa 420 billion.