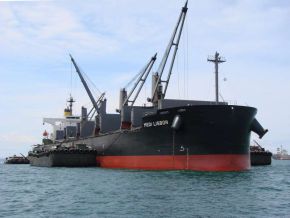 Has the Irish ship Medi Libson been seized at the port of Kribi?

The communication service of the autonomous port of Kribi (PAK) just released a statement which most believe indicates that Irish ship, Medi Libson, was seized last Thursday while loading 27,000 tons of biomass at the Kribi-Mboro port’s docks.

“No such thing happened. The Medi Libson is doing well and continues its activities normally. However, another trawler, the Port Life I, matriculated K-10/IS 2016, was seized on June 25 at Kribi,” the statement actually says.

Giving further details, the source notes that 11 sailors, Cameroonians and Ghanaians, were arrested on board of the trawler. The individuals were caught fishing illegally at 1.5 miles from the coast (in the legal area of the PAK), while regulations prohibited trawlers from fishing within 3 miles (5 km) off the coasts.

The reporting authorities (Merchant Navy, Fisheries, National Marine and Harbor Master of Port of Kribi) said Port Life I could pay a fine of up to FCFA3 million for selling the fishes illegally.