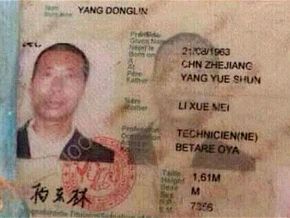 No, this is not a Cameroonian ID

People said this ID showed that a Chinese was naturalized to become Cameroonian. True?

Let’s do a quick test. When you turn down your screen brightness, you can easily remark that the ID was initially green but has been colored in orange. Indeed, the resident permit, which is solely for expatriates is green; while the Cameroonian National ID card is orange-like, as the photo below shows.

Whoever made the fake ID would obviously have people believe that the Chinese featured has taken Cameroonian nationality. But the guy in question only has his resident permit (because of living on the territory) and not the National ID which is exclusively reserved for natives.

Under the nationality code, one can only be a Cameroonian by birth (while this Chinese was born in Zhejiang, China), adoption (marriage of another nationality to a Cameroonian and vice versa) or at the request of the foreigner.

In short, the process of naturalization requires many criteria and is decided by decree. The expatriate benefits if “his naturalization presents an exceptional interest for Cameroon”.