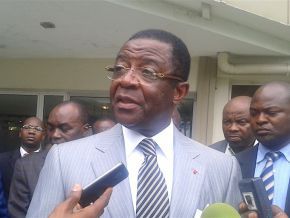 Has Edgard Alain Mebe Ngo'o been questioned by a special criminal court?

According to some information relayed by some Cameroonian newspapers, Edgard Alain Mebe Ngo'o, the Cameroonian minister of transport might have been questioned by the special criminal court (tribunal criminel spécial-TCS) some months ago. This is due, according to rumors, to some financial activities deemed unorthodox which brought sir Mebe Ngo'o under the radar of the special court.

The communication department of the ministry of transport contacted on September 27, 2017, denied the information. ‘Sir Mebe Ngo'o has not been questioned by the TCS. This info is wrong, absolutely wrong,” it stressed.

The communication team of the government official also denied the information according to which it is the "rapid increase in the spending of the minister of transport" which led to an audit by the higher State supervisory authority. “The higher State supervisory authority is truly investigating in the ministry of transport at this moment (this September) but, it is investigating on the 2013-2015 timespan. Sir Mebe Ngo'oa was appointed on October 2, 2015. Therefore, he is not really concerned by the audit,” the team clarified.

The communication team added that the information is also inconsistent because the audit is not yet completed but people are already talking of hearings at the TCS. “On what legal basis could the TCS summon the minister?” The team asked amused.