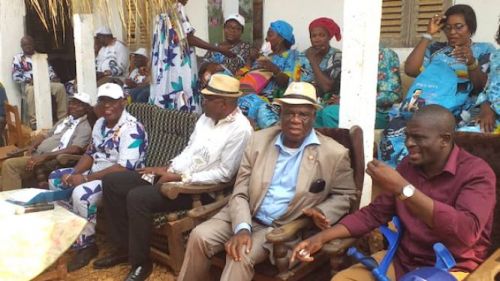 No, Monatélé’s outgoing mayor did not resign

Supposedly, André Tsala Messi released a letter where he says he will not run for the coming municipal elections. Is it true?

“For 24 years, you have trusted me by keeping me as the head of the municipality of Monatélé, a record that has never been equaled. (...) Many people from the villages and neighborhoods of the Monatélé district are asking me to hand over the baton. I have decided to resign to not betray you.”  This message is seen on a document that has recently been circulating on social networks. Some attribute it to André Tsala Messi (in grey suit and blue shirt), mayor of the Monatélé municipality.

After investigating the outgoing mayor’s entourage, it was confirmed that the document is fake.

“How can an outgoing mayor who fought to be invested by his political party give up after campaign ballots for the upcoming municipal elections have been printed?” A source close to the official says. Another rather confirms that the mayor is currently on the field of the electoral campaign for the municipal elections to be held on 9 February 2020. "We were together Tuesday [January 28] in the localities of Mvomekak and Lekoun in the district of Monatélé," said another credible source.