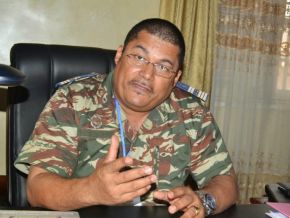 Did Colonel Badjeck, spokesperson for the Ministry of Defence, recruit for the army on Facebook?

Based on a profile created on this social network, this high ranking army personnel is supposedly requesting money from people interested in being recruited in the Cameroonian army.

Colonel Didier Badjeck is fuming. The spokesperson for the Ministry of Defence (Mindef) declared on 29 May 2017 on his Facebook page: “There are malicious people who hacked into an account which apparently belongs to me or who created a fake profile in my name. I must say that I have only one Facebook account on which I post my messages and this is the one I am currently using”.

The Communication representative of Mindef adds: “On the hacked account, I supposedly appear in an air force uniform and I offer to recruit candidates to what end? Please do not get caught in this scam. This is just another case of cybercriminality, an activity which is steadily flourishing, with diabolic ingenuity”.

After searching through Facrbook, one can indeed notice that there are several profiles for Colonel Didier Badjeck. On one profile, he is wearing a military uniform. But on the official sccount, it is rather the image of his aircraft which is used as profile picture.

We must say that this is not the first time that Mr. Badjeck is the victim of a fake profile on Facebook. Being a known personality in the Army, people often try to operate scams in his name, by offering to positions in the army for money.