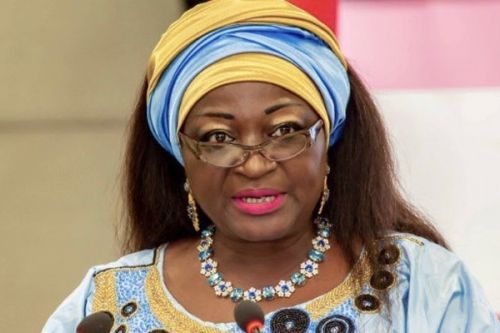 On December 10, 2021, Célestine Ketcha Courtès was appointed the President of the Board of Directors (PCA) of the African School of Architecture and Urban Planning (EAMAU) for a one-year term. She is the first Cameroonian to hold the position since the launch of the Lomé-based pan-African academy in 1975.

Courtès, who is also Cameroon’s minister of housing and urban development (MINHDU), attributes her appointment to President Biya’s efforts to develop and modernize Cameroonian towns. But, many observers claim she was appointed because of her large network abroad.

Married to French Jean-Pierre Courtès since 2005, Célestine Ketcha Courtès partly studied in France. She is close to the mayor of Paris, Anne Hidalgo, and former French minister of environment, Ségolène Royal.

She is reportedly close to Cameroon’s First Lady, Chantal Biya. She was even invited to the latter’s  51st birthday celebration on December 5, 2021. Célestine Ketcha Courtès also has a good relationship with the Secretary General of the Presidency.

She became the minister of housing and urban development on January 4, 2019, during a government reshuffle. Courtès was appointed despite her disagreements with the Senate’s President, Marcel Niat Njifenji, who is also from Ndé, her hometown, and this tells a lot about her influence.

Unlike her critics, Courtès’ supporters attribute her success and reputation to her contribution to Paul Biya’s victory in the October 2018 presidential elections and to her commitment to urban development.

Among others, the former president of the Network of Local Elected Women of Africa (Refela) mobilized funding in the framework of the North-South decentralized cooperation. As the first female mayor of Bangangté in the Western region (2007-2019), she also secured significant financing from international partners for the municipality. These funds even benefited the neighboring municipality of Bangou, which was at the time headed by Rosette Mboutchouang, mother of the First Lady. For example, Bangou benefited from a partnership between the French firm Veolia Environnement and Bangangté. This partnership helped the town boost its water supply.

Bangangté is a model eco-friendly city, both in and outside Cameroon. In June 2016, the city was awarded the AFAQ 26000 Collectivities Certificate by the French Association for Standardization (Afnor), during Ms. Courtès’ mandate. According to the Afnor, this certification demonstrates that "the issues of social responsibility are integrated as key vectors in the implementation of the development policy of the city of Bangangté."

While some accuse Célestine Ketcha Courtès of taking advantage of her network to achieve her goals, her supporters are convinced that her dynamism is what allowed her to join the government on January 4, 2019. She is indeed known to always seek performance and results.